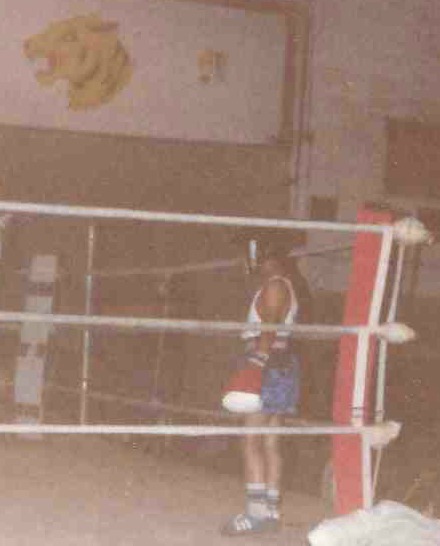 Steve Van De Walle (Red Corner) 1980. My first match was at our own gym, the Viscioni Tigers.

We were always told by Bert Viscioni, that Jack Dempsey once fought in our ring. The very ring in this picture.

From Baseball to Boxing

At age 5, when my dad came home from work, he asked why I was so sad.  I told him I walked onto the baseball field at the park and they said I was too young to play.

I had actually walked onto the field during the middle of a Little League game and the umpire ran me off the field.

My dad asked if I wanted to go to the boxing gym instead.  I shrugged my shoulders and we went to the gym just a few blocks from our home.

When we got to the gym, the head trainer and gym owner, an old Italian man named Bert Viscioni, grabbed my dad by the shirt and said, "You ready to start boxing!"

and then told him to bring me back in a couple of years.  I looked down at the floor and then Bert said,

"Ok, bring the kid back tomorrow and we'll get him started."

My dad told me that boxing practice started before he got off work, so if I really wanted to go, I'd have to walk there by myself, once I got home from school.

I went there the next day, fell in love with boxing and never quit going.  I ended up having about 30 exhibition matches

by the time I was 10 and old enough to have a sanctioned bout.

My first year entering the Silver Gloves I won State and Regionals and placed third at Nationals.   Since then these are some of my accomplishments:

On January 13th 1994 at the age of 18, my life changed forever when I was driving home from work.

I fell asleep and had a head-on-collision with a double trailer semi-truck!  I nearly died that day and was left unable to walk for 1 year.

See a picture of this tragic experience during this short video clip. 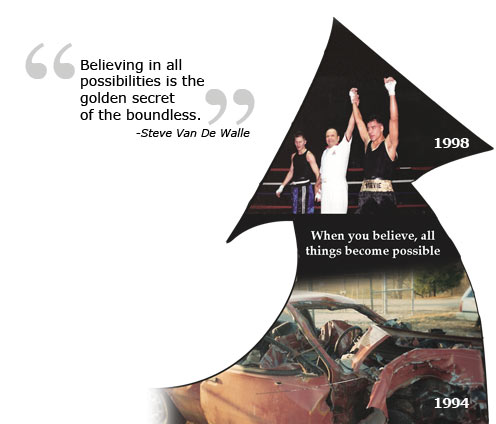 In August of 1996 I set out on a mission to return to the boxing ring as I joined the U.S. Army with hopes of making the Army’s World Class Athlete Program's Boxing Team.

I began competing in 1997 and then in 1998 began winning titles again.

I then went on to compete in the 1998 World CISM Games in Warrendorf Germany with some of the best boxers in the world.

From Wheelchair to Gold Medal in 4 Years

As I walked out into the stadium as they introduced one nation at a time, I couldn't believe that just four years before I was unable to walk!

This was a result of many people who helped me along my comeback journey.

If you are still reading, I have no doubt that we are “like-minded-people.” And together, we make sure your reach you reach your goals.

in various training camps, tournaments, and learning from and training with some of the best boxing minds in the business.

I learn from experience and study with you along the way.

In 1998, just a month after competing at the World CISM Boxing Championships in Germany, my injuries were catching up with me.

It became excruciating to continue doing the intense interval running and lower body plyometrics to prepare to compete at this elite level of competition.

I ended up competing one more time in a USA vs. Mexico dual and then had surgery on my knee in early 1999.

I retired from boxing while still in my prime.  Before I left the Army World Class Athlete Program at Ft. Carson Colorado,

I told my coach, Basheer Abdullah (4x Olympic Coach) that I already missed boxing.  He looked me, and said,

A month later, I was back home in the Quad Cities and training my first boxing student, Joe Perez.

A year later we were at the National Silver Gloves as Joe had won both State and Regionals.

It was just like being there for my first time, except this time I was outside the ropes.

to my young up and coming boxers.  Soon I had my own gym full of

soon to be champions. 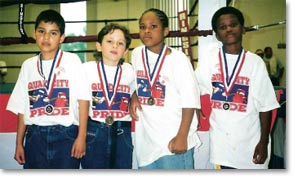 As a boxing trainer I have trained state, regional, and national champions. I have also trained elite boxers that I started training from day one.  I started teaching each of them the fundamentals of the best stance for balance, footwork, and boxing "behind a feint and jab."  As they continued to advance I taught them strategies to box against various styles of boxers, counter punching, head movement, how to pot-shot, "catch and shoot," and many other advanced strategies and punching combinations.

In addition to this first hand experience inside the boxing ring and in the gym with competitive boxers, a few MMA fighters and one UFC fighter, I have also trained many beginning boxers, in boxing fitness classes for the past 12 years that included many women and men in their 20’s, 30’s, 40’s, 50’s, and even 60’s.  None of these people ever boxed competitively but they all got in great shape, continually develop their boxing skills and always leave the gym “Feeling Like a Champ!

To this day I am still training beginners in boxing fitness classes, volunteer to work with some amateurs on occasion, and currently train professional boxers as well.

Since you have read al the way to the end of this page, I believe we share a common passion about much more than boxing.  We share the desire to continue learning, interacting with other positive people, and sharing what we have learned along this journey of life.  I am a school teacher and love teaching and helping my students improve their lives. But my first love is boxing, and I really look forward to sharing everything I’ve learned over the past 37 years and am still learning with you.

I’m In Your Corner